Richard Higlett as curator of The Witching Hour 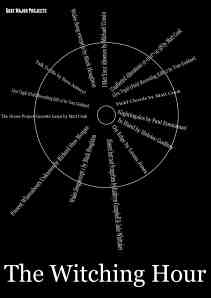 As part of Cardiff Contemporary, Goat Major Projects will presenting

its 7th Project: The Witching Hour. This will feature the creation of a

sonique lounge in the Canton based project space. The lounge will play a

programme of sound art by artists based in Wales.

whose book ‘Haunted Weather’ refers to sound as being uncanny and

other worldly. Selection of artists has been through an open call ending

midnight 1st October 2012. The project will also have 2 performances at

evidence confirming sound is a vehicle for conveying the physical

presence of things and people.

Richard Higlett is an artist who works across a range of media and as part of this artistic practice he also curates. He works equally with galleries and in the public realm. Previously he has presented installations, sound projects, public interventions and podcasts along with paintings, sculpture and film works. He has shown work throughout the UK and internationally in Montreal, Bruno, New York and Venice, Italy.
Before returning to full-time education at 25, he was a qualified Stress Engineer, he graduated with a BA (hons) Fine Art in 1994 and an MA Fine Art in 2001. From 1997 to 2002 he was Chair of Top Floor Studios and trustee at Spike Island, Bristol. In 2005 he won the Oriel Davis Open and worked as Arts Portfolio Manager at Cardiff Council, initiating the first Cardiff Contemporary. In 2007, he set up Artist Resource Cardiff now ArtCardiff and co-founded Mermaid and Monster an artist-led curatorial agency. In 2009, he was acting Project Manager for Wales at the Venice Biennale and subsequent international exhibition tour. During this period he was also a consultant for the Arts Council of Wales in relation to artists’ professional development. In 2010, he was also a Projects Manager for Wales Arts International and developed the ‘Sound Car’ project. In 2011, he co-founded Goat Major Projects a flexible project space in Cardiff, curating 4 of the 6 shows in the first year programme including The Witching Hour: Artists from Wales using sound. In 2012,he was the first Glynn Vivian Gallery Artist in Residence, exhibited as part of Soundworks, ICA, London and presented a series of public interventions as part of UNSEEN: Experimentica at Chapter, Cardiff. A previous advisor for the AXIS Artists Database, he has had numerous texts on artists published on-line while he is a qualified teacher and experienced part-time lecturer.
He is an invited artist member of the Contemporary Art Society, London and in 2013 is a recipient of a Creative Wales Award from the Arts Council of Wales researching the idea of a creative practice that is a hybrid of artist and curator.

Intervention
2013 Red Rats, during Venice Biennale, Venice, Italy.
2012 A These Worlds Are Yours Except… With band Bear-man, Cardiff, UK
2003 10,000 Reflective Copper Discs, Urban Legacies:
Aint no love in the heart of the city, CBAT & public sites, Cardiff, UK